IT’S ME OR THE BAG BY ANGELIA VERNON MENCHAN 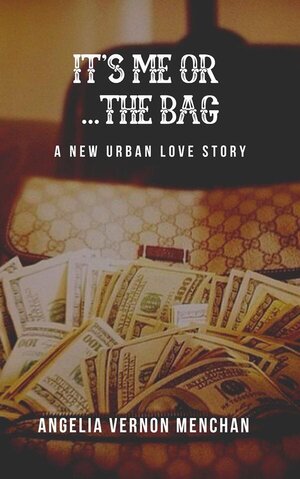 IT’S ME OR THE BAG BY ANGELIA VERNON MENCHAN

Kena has been patient with Raphael and his side business. A year earlier she gave him an ultimatum, her or the bag. 366 days later she was gone, leaving no clues behind. Will Raphael be able to come correct for the woman he loves or will he decide the bag is more important? Take this new urban journey and discover the choices. 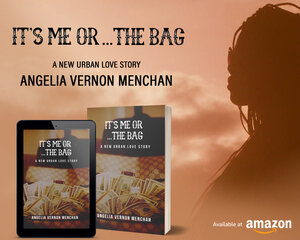 Raphael stared down at the bags filling the vestibule. There were four large suitcases and a designer duffel bag he’d purchased for Kena last year. He didn’t even know the designer but knew she would have it because it cost a grip to purchase. He wanted her to have everything and more.
She ain’t leaving me and taking my shit, was his first thought, but as he walked through the huge house, he realized she wasn’t there, and the smaller nondescript suitcases were gone with her. Racing back to the living room, he kicked one of the bags, and realized it was empty. Checking one and then the other, he saw they were all empty, except the duffel. It was filled with other expensive handbags he’d purchased.
There was also a note: Raph, I told you it was me or the bag... I’m not living that life with you forever. Since you chose the bag, here are a few more.
Kena.
Feeling frustrated and scared, Raphael turned around in a circle, their life together, flashing before his eyes. She warned him.
“Raph, we both have degrees. You promised you would stop the... the street business as soon as you graduated. Now you have a master’s in international finance and all kinds of offers but you’re still about the bag.”
Raphael watched her as she spoke but said nothing. She was right and he knew it, but the job they were offering paid sixty thousand. His weed business brought in that every other month. He couldn’t see a way to stop. Kena was earning six figures with her makeup and hair importing business, but it wasn’t enough. They would go from almost five hundred thousand a year to just over two. “You have one more year to figure it out. We own this house and both our cars, and we stacked money. I’m done looking over my shoulder. I love you but we can be out, or I can. I’m over thirty now. I want a baby and normalcy. I’m not having a kid while you’re doing this.”
She stared him down, waiting for a response he couldn’t and wouldn’t give. Three hundred sixty-six days later, she was gone. ¥¥¥¥¥Aretha held her daughter in her arms as they stood waiting for Kena’s flight. She knew how much Kena loved Raphael, but she also knew when Kena was done, she was done. There was once a time, Kena hadn’t approved of her mother’s life. As soon as she’d turned seventeen and had graduated high school, she left and hadn’t looked back, though she loved her and kept in touch always.
Aretha had been a hairstylist who ran her business in her kitchen with other side hustles included. She sold stolen items and allowed neighborhood guys to gamble in her home on weekends for a price. Kena had chosen to stay with Mary, her father’s mother, on weekends. But now, years removed from that place, Kena was leaving again. Her ticket said Miami, but Aretha knew that was only a stop on the way to somewhere else.
“Why leave, Kena?” Aretha asked, pulling back, looking at her daughter.
Kena was beautiful with dark brown skin, perfect brows she was obsessed with and a full pouty mouth.
“Mom, I need to. Raphael would give me no peace, and I need him to believe me when I say no more. We were married two years before I knew. I love him so much I looked the other way for three more years but not now. I can’t compromise on that. It wasn’t necessary then and it’s less than necessary now. I must do this. I love you.” Kena kissed her mom’s face, a face so much like her own, and hugged her before heading to catch her flight.
Aretha watched her, hot tears coursing down her cheeks. Kena was all she had. Her mom had passed a year earlier, and her father had been gone for years. She was an only child, born to parents who were the only children and Kena was her only child. While she and Raphael were so close he could be her natural born son, she could choke the life out of him. He made this bed for both to lie in. It took everything not to go and confront him, but she knew if she did, there would be hell to pay with Kena. She was leaving but allowed no one to disrespect her husband. The only reason Aretha knew about Raphael’s business was because he’d told her.

one of three e-book copies of It’s Me or the Bag!