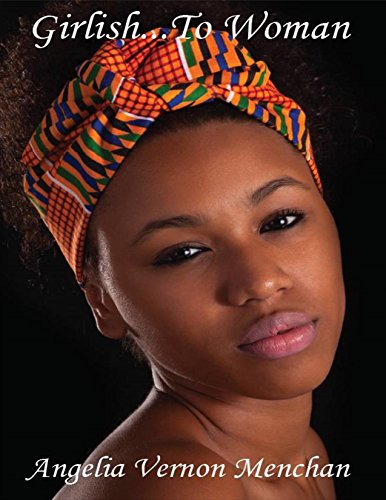 She's done it again, and by she, I mean Angelia Vernan Menchan. She has once again managed to take me through a barrage of emotions. Girlish was so different from Womanish in the sense that it was targeted at young girls and girls coming into womanhood. I know I've said it before when she wrote Womanish, but Mrs. Menchan always manages to show me myself in each of her characters. This time was no different. Let's get into it, shall we?

The first story was about a young girl named Trina. Her mother came running to Angel, desperate for help with rescuing the young girl from the clutches of a predator. When I tell you I hollered when Angel grabbed her glock, I ain't lying. But what took the cake was when she told Darnell she was going to lay him the hell down if he didn't bring her that young girl out of his house!

The next story was about a young girl named Jo and this story touched me deep down in my soul. I felt so many things for Jo, so much so that I can't even name them all. It's like Jo's soul took trips in and out of her body. One minute she was lucid and the next she was just floating, better yet dancing, on air, trying to get by. I feel that life, her adoptive mother and father had failed her in a sense. We've heard Jo's story time and time again and yet nothing is done to ensure these kind of people don't have access to the children. But as with any predator, they are good at hiding their hand.

I'm already laughing to myself because I'm about to talk about Vi. She was something else, but I'm not even going to say much about Vi. I'm going to let ya'll read that and be tickled on your own. I wonder if that smell ever fully went away. LOL!

With Lisa, all I can say is that I'm happy she found a way to live her life freely. Maybe Wanda will follow suit? With Glenda, in the end, I was happy she got something out of the deal because baby when I tell you I wanted to shake the ish out this girl, I ain't lying. Delia came through like a wrecking ball, kicking butt, spitting, and taking names. I felt sorry for her because I know her struggle all too well. And poor Debra... I still wonder what was going on in her home to make her turn to a vice at such an early age.

It was the last story that touched me the most because the author revealed some deep dark secrets of her own. This proves that many times we think we know a person and their story when we really have no idea. I won't speak too much on the last story because I really need people to get into this book and understand that sometimes, no matter how life tries to screw you over, you don't have to become what has happened to you. I want to thank this author for writing an inspirational book that actually teaches you without preaching to you. I know a lot of folk won't get that, but to those of us whom Mrs. Menchan has ministered to, we get it. Angel is the kind of Elder that is so desperately needed for the young girls and us young mothers, especially today.

All-in-all, I give this book five pages (think five-stars). Nikki-Michelle recommends this book.

October 30, 2015
This is another stop on a new slate of reviews I'll be posting on Nikki-Michelle's Spot. Before I ever had dreams of becoming a writer, I was a reader. That hasn't changed. I love to read. A good book can always take me away like Calgon.  Next up, Naughtier Than Nice by Eric Jerome Dickey. I should note that this book is NOT on Kindle Unlimited. As a reader, I'm a fan of Kindle Unlimited. If you're a reader looking to test a new author, KU is a good investment, especially in this market of....eh, that's a story for a different day. Back to Naughtier Than Nice.

Man, whew. I've waited so long for EJD to get back to this style of writing. Now don't get me wrong I love Gideon and  the chick from A Wanted Woman, but I longed for the day EJD would get back to the Cheaters and Liar's Game style of writing. Once I read One Night earlier this year, I knew I was going to get Naughtier Than Nice. First off, let me say it did my heart some good to get an update…
9 comments
Read more