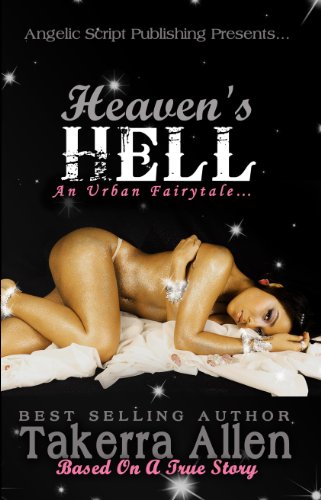 So I watched Heavens Hell as I've heard so many great things about the author of the book the movie was based on, Takerra Allen. I read her book Devout a few years ago and was pleasantly surprised at how it held my attention. I finished the book in one night. I'd rate that book four stars, but this post isn't about that book. This post is about the movie she's released titled Heavens Hell. So let's get into it, shall we?

First let me say, I did NOT read the book before watching the movie. So I went in blind, not sure what to expect. The one thing I didn't like was how uncomfortable this movie made me. Heaven, the underage star of the movie, was still in high school and yet she had the overgrown Khalil as a boyfriend. The girl was only sixteen. She had been neglected by her mother, sexually abused by the man we assumed was her father, and now there is this grown man who has claimed her as his girlfriend? Did I mention this movie made me uncomfortable?

In comes G, the drug lord (I'm assuming) and the captain who has been charged with saving her. He, too, was another overgrown-ass man who continued the cycle of sexual abuse on the underage Heaven. I had to wonder why no one was there to really save this girl. No, G, was not abusive like Khalil, and yes, he showed her the good life, but he was an adult and she was a child. He shouldn't have been having sex with her. YIKES! The upside is I did like Ricky's character and was hoping that Heaven and he had more of a story line. However, they didn't.

The movie ran for two hours. About one hour and thirty minutes in, I started to fast forward as I felt the movie had started to get stagnant. Even though I fast forwarded the movie, I could still follow the plot without feeling I'd missed anything. For the most part, the movie the kept my attention. I felt Heaven didn't stand a chance at having a normal life, but I was content with the ending as it could have ended much worse.

I think Ms. Allen and her team did a phenomenal job bringing her characters to life. For this to be a movie that was on Youtube and independently produced, the quality was stellar. The actors and actresses did a phenomenal job. My only gripe was that the movie probably didn't need to be a full two hours, but the team did what they felt was best for the movie. Overall, I'd rate the movie a 3.5.