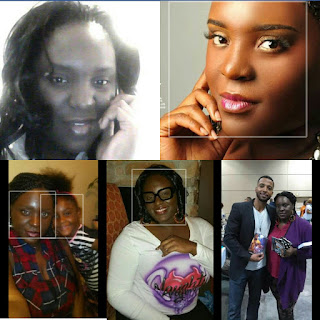 I just saw a video that broke my heart. I don't know the woman in the video, but I've heard a lot of good and positive things about her. Julia Press Simmons, I don't know you, but I know how you feel. I know how you feel to the point that I shed tears with you. I know what it is to finally feel so damn good about life and yourself that you're going to wear that dress and/or put on that makeup and have a damn good time. Your story and the way you stood up in the face of bullying gave me the courage to finally share my story.

In September of 2012, my husband walked out on me. I found out he was cheating and my whole world went on a fast track to hell. Not only did he cheat on me, but along with the physical abuse, he verbally mutilated my self-esteem. By the time he'd said what he had to say I was broken. I was bruised. I felt less than a woman. I was black. I was ugly. I was fat. I was unwanted. I felt so damn low to the ground it was hard for me to get up out of bed most mornings.

Well, thankfully, I had friends who pushed and pushed me to not let it get me down. Fast forward to May of 2013, a good friend of mine, James C. Lewis of Noire3000 Photography out of Atlanta, helped to convince me to take professional photos. I'm an author after all. It's always good to have some professional photos for promotional items. James even had to talk me into getting makeup done. I'd never worn makeup a day before in life. So, I was scared and nervous. But, I let the makeup artist do her thing. I took those photos and in June, James sent me the final product.

Fast forward to October of 2013, I flew to St. Louis to do the Pajama Jam with Brenda Hampton and Oosa Book club. I'd invited a woman, whom I'd assumed was my friend, as she was also one of my favorite readers. She had loved my books and over the year or so that we had been speaking, I'd grown fond of her.

Two days later, after the fun and laughs at the PJ Jam, I'm sitting home and I get an email from a close friend of mine. I'd spoken highly of this woman to him and his wife. However, this friend and his wife informed me that I probably no longer wanted to speak so highly of this woman again as she didn't think the same of me. This gave me pause. I asked what they meant. They really fought with themselves as to whether or not they should tell me, but in the end, they did. And I'm very thankful that they did.

I was going to post the screenshots just so I could show my receipts from this incident, but under the advice of my agent, whom I love and admire, I removed them so not to offend the other parties that the woman in question spoke so ill of.

This woman had talked about me and several of the other women at the event like we were nothing, less than human. Not only did she talk about them she talked about my looks and how I looked different in my professional photos as opposed to my regular ones. She posted a very old picture of me side-by-side with my professional photo and asked the man if I looked liked the same person. Apparently, she and her cousin had talked about me and the rest of the attendees all weekend long. This woman even pretended to be sick, just so she wouldn't be around us, because we were everyday black people from all walks of life who chose that weekend to just relax and let go. She even accused us of being broke and having no decorum because we warned her not to buy food or drinks from the bar as they were not up to standard.

We'd already complained to management which is why we all had vouchers for the weekend so we didn't have to pay for anything. Since we had been there a whole twenty-four hours longer than they had, we continually warned them not to buy food or drinks. "Don't spend your money. We have vouchers," we told them. Simply because we felt we shouldn't have to pay for sub-par services. However, she and her cousin apparently had other ideas in mind. They felt we couldn't afford to drink or eat. Please don't be fooled. Any one of us there could have bought and sold them ten times over. That's neither here nor there.

The thing that hurt more than anything was the way she talked about my looks and accused me of skin bleaching/lightening. I may want a flatter stomach and toner thighs, but my black skin will always be my black skin. For that very reason, I've posted several pictures of myself to show me in all kinds of different lighting. All of those women you see are me and I am she.

To speak so ill of people she didn't even know, who went out of their way to make her feel included in our event was low and it was evil. It spoke of how unhappy she was with herself. Now I could have gone to Facebook and aired her out, but I didn't. I could have spoken on her false teeth, hazel contacts, and silky synthetic wig and drawstring ponytail, or the way she was built, but I didn't. I was better than her and I still am. The only reason I'm doing this now, is so another woman can know, she is not alone.

I said all that to say, Ms. Julia, you looked amazing. You stepped out of your comfort  zone and came through to slay! No matter what anyone has to say about you, you rocked the hell out of that red dress. You have the confidence and sense of style that I only wish I possessed. You are beautiful and even though we have never worked together or even met, the work that you do for AA authors and our literary community speaks volumes. Do know that it is not you, but them, who needs to check themselves.

To the person (s) who chose to hide behind a screen and talk sh*t please look below: