All-white doesn't mean all is right. I keep seeing that meme "I wish Black lives mattered to black people" being shared. It disgusts me in so many ways. A friend, whom I think highly of, shared it this morning (screenshots posted below). He's a police officer. He's black. It saddened me to see it coming from him. But it proves something that I've long thought to be true. Black police officers view us the same way as their white peers. This friend proceeded to tell me how another of his black friends had moved to an all-white neighborhood. He said his friends' children love it because they can play without being bothered by other kids. Another thing he said was that he has to look both ways before he leaves his home and that it had nothing to do with crossing the street.

I was pretty disgusted. It made it seem as if moving to an all-white neighborhood made it all better, as if ‘all white’ is the standard...as if 87%of white people aren't killed by other white people. As if white males aren't the highest perpetrators of violent crimes (This is fact. It can be proven. Don’t fight me on this). As if America’s most notable serial killers aren’t white men. Never mind the fact that young white males are leading the charge in mass shootings. Statistically speaking, now that his friend has moved to a white neighborhood, there is a greater chance of him and his family being victims of crimes.

This friend spoke about how on his “video feed” at work, he sees the most violent things. I’m assuming he meant those committed by black people. As if the system isn’t already rigged against us. As if that same system hasn’t placed Black people in a jungle and forced them to adapt by any means necessary. Now pause. This in no way excuses the criminal actions of those in Black communities who are committing these violent crimes. I’m speaking on the fact that while white men commit crimes, Black men are the criminals.

That means that when one of us commits a crime, it makes all of us criminals. However, when a white man commits a crime, a white man, solely, committed the crime, not the entire white community.  This friend even went on to say that it’s a shame that a daughter can call her mother a dirty bitch—as if this is a black thing only—or how one brother can stab another over a turkey leg. Stabbing or killing a person over food is not exclusive to the Black community as can be proven here, here, and here.

He went on to mention how Black people sometimes refused to be witnesses to crimes or testify in court. I find that hypocritical. Yes, the Black community has a toxic no snitching policy, but so does every police force in America. Prove me wrong. That blue wall is a strong one and can NOT be penetrated. Go on. Prove me wrong. I’ll wait.


He gave me his opinion with the option to respond in kind. I chose to respond with facts. That false sense of security that his friend has in his new all-white neighborhood is a very dangerous mindset. All white doesn’t mean all is right and to even hint at anything different is malarkey. 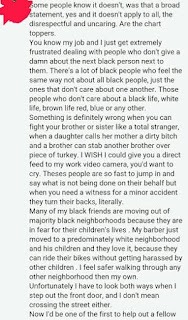 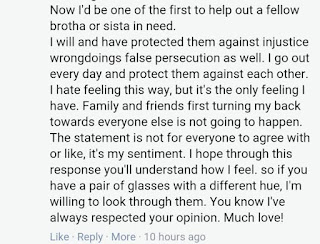