Hello, my page turners and bookends! A few weeks ago, I entered a mega giveaway that Meredith Wild, New York Times Bestseller and author of  the wildly popular Hacker Series, was hosting. Out of over 14,000 who entered, I was one of the 300 chosen winners. Imagine how excited I was to get the email that lil' ole me  had been chosen as winner. Now imagine that excitement a hundred times over when I actually opened the door to see my postman delivering boxes of books!

I won't ask you to jump through hurdles win these books either. All you have to do is leave a comment on this post and I'll randomly select winners. I'll also post this to my Facebook page. Keep  in mind, only nine people can win! May the best page turner or bookend win!

Meanwhile, I'm about to grab a nice hot cup of coffee and jump headfirst  into the Hacker Series! Reviews will be posted for each book as I go along.

Disclaimer: OPEN TO U.S. RESIDENTS ONLY! 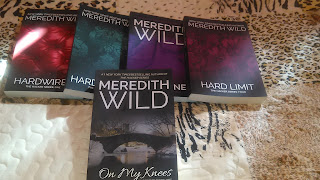