Glimmer in the Darkness (Forgiveness): A Review 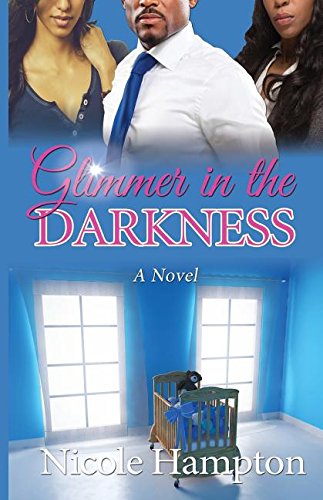 This is another stop on a new slate of reviews I'll be posting on Nikki-Michelle's Spot. Before I ever had dreams of becoming a writer, I was a reader. That hasn't changed. I love to read. A good book can always take me away like Calgon.  Next up, Glimmer in the Darkness (Forgiveness) by Nicole Hampton. I should note that this book is NOT on Kindle Unlimited. As a reader, I'm a fan of Kindle Unlimited. If you're a reader looking to test a new author, KU is a good investment, especially in this market of....eh, that's a story for a different day. Back to Glimmer in the Darkness.

Whew. I read Glimmer in the Darkness (Forgiveness) by newcomer Nicole Hampton based on the reference of one of my friends on Facebook. They posted the link to the book and the synopsis. So I decided to take a look at it on Amazon. I read the prologue and was hooked. I was thinking ‘WOW!’ from the first line. However, after the prologue when Vaneetra, the mistress of Daniel, showed up to Shannon’s, Daniel’s wife, door step, I knew I was in for a long ride. So let’s get into it.

Upon opening, as mentioned above, Vaneetra showed up and all hell broke loose. From the very first page we know Daniel ain’t S.ugar H.oney I.ce T.ea. Once Vaneetra left Shannon with her face on the ground after revealing she was not only Daniel’s mistress, but also carrying his child, Shannon grabbed the wine and almost burned the house down. LOL. Daniel came home in all his arrogance and wouldn’t even give his wife the courtesy of being honest with her. He tried to tell her she was drunk and out of her mind which was a slap in the face.

Afterwards, the book jumped ahead to three months after the birth of little Madison. Honey, this is where things just got more baffling. I was trying to figure out Shannon’s family. Now Daniel’s family fawning over Madison, I got. She is their flesh and blood. However, Shannon’s mom and sisters made me scratch my head. So the Christian thing to do is to say screw how your daughter and sister feel, we need to accept this illegitimate child because hey, the baby is innocent right? I think not! I wish my brother-in-law would try me and my family as such. LOL! And that’s all I’ll say about that. *shrugs* Guess we’re not “Christian” enough.

Contrary to the women in this book (and Shannon’s brother, Craig), I did not see Daniel as a “good” Black man. Nothing Daniel did in this book warranted the “good” Black man praise, not after what he did. Not even working hard to support his family and taking care of the illegitimate spawn he brought home to Shannon. Why? Because those are the things any man worth his weight is supposed to do.
Even though Daniel was on my hit list, my issue with this book were the women. Did every woman in here read a page from the same script? Not one woman in this book, not Shannon’s mother, not her sisters, not her best friend, NONE had her best interest at heart. They didn’t give this woman time to heal in the least! As soon as they found out what Daniel had done, they immediately went in to “Daniel’s a good black man” mode. That grinded my gears.

They harped on her to forgive and forget. Basically they seemed to be hitting her with that “men will be men” trope and I felt sorry for Shannon. And when LeVonda, Shannon’s best friend, told Shannon that denying her husband sex was against God’s will according to the Bible, I just about lost it. But nobody quoted those “thou shall not commit adultery” scriptures to Daniel, and trust me, there are quite a few passages about adultery in that same Bible.

She had no support. All support was for Daniel. They didn’t want Shannon to take a “good” Black man from his Black sons. And not once, did any one lay into Daniel about the mess he had made. Well, Josh, Daniel’s best friend, did, but it was so close to the end of the book that it didn’t matter.

Also, the synopsis implied that Shannon ended up in the arms of another man whom I’m assuming was Harold. The only thing is, she didn’t end up in his arms. Not the way the synopsis implied. I’ve already typed way too long of a review. In this day and age, if I keep going, people will say I’m attacking the author and that’s not my intention. I think the author was so busy trying to preach the word of God that she forget to tell a good story at times.

What I will commend the author on is a good storyline and a somewhat good execution. Even through my frustrations, she managed to get me to read all the way to the end of the book. One more thing I need to mention, is the author’s lack of the use of contractions. For example: “I did not tell you, because I did not want you to put in a good word for me. It would not have done me any good. And no I will not tell you when I go for the follow up. I can not afford for you to ruin this for me.” (I'm paraphrasing). This made the book read choppy at times. A good editor would have caught this. There were a few more editing issues in the book, but they weren’t bad. Overall, I give this book 3 pages (think 3-stars). Christians will probably dig this book so therefore, I recommend it.

October 30, 2015
This is another stop on a new slate of reviews I'll be posting on Nikki-Michelle's Spot. Before I ever had dreams of becoming a writer, I was a reader. That hasn't changed. I love to read. A good book can always take me away like Calgon.  Next up, Naughtier Than Nice by Eric Jerome Dickey. I should note that this book is NOT on Kindle Unlimited. As a reader, I'm a fan of Kindle Unlimited. If you're a reader looking to test a new author, KU is a good investment, especially in this market of....eh, that's a story for a different day. Back to Naughtier Than Nice.

Man, whew. I've waited so long for EJD to get back to this style of writing. Now don't get me wrong I love Gideon and  the chick from A Wanted Woman, but I longed for the day EJD would get back to the Cheaters and Liar's Game style of writing. Once I read One Night earlier this year, I knew I was going to get Naughtier Than Nice. First off, let me say it did my heart some good to get an update…
9 comments
Read more