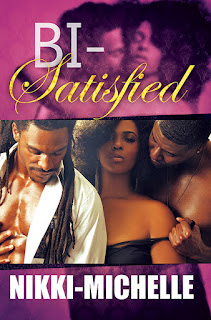 “Consider it a peace offering,” he said to me as we walked to theater. “I’m not confused. Not gay. I’m me. I’m a man who happens to like both men and women. Can you live with that?” he asked me as we walked behind David, who was on the phone.
I stopped and looked up at him. “Did you come all this way just to have sex with David?”
“And what if I did?”
“Is he open to it?”
“Ask him.”
“If he was, would you? Even with a wife at home?”
He shrugged. “Depends on the mood.”
I looked at David who’d finally noticed we’d stopped. He was still on the phone talking to one of the partners in the firm, but his eyes were planted firmly on us.
“What’s that mean?” I asked looking back at Michael.
He gave me a once over that made my inner thighs moist. “Can I have you too?”
“What?”
“You heard me. I’m a man who knows what he wants. I won’t have him if I can’t have you too.”
I chuckled, cheeks flushed red I was sure. “You don’t know me.”
“I know I like what I see, Freckles. That’s what I’ll call you from now on…Freckles. Told David I wanted to count your freckles up close,” Michael said.
He closed that small gap between us and brushed a smooth finger over my freckles. I licked my lips to wet them. Took a sip of the large Sprite to wet my throat. I looked at David. I couldn’t read him. Didn’t know what he was thinking. I didn’t want to make him mad. I knew that. I was so busy trying to garner David’s reaction that when Michael turned my attention back to him, lifted my chin, and placed his lips against mine, I almost dropped the popcorn and Sprite.
Shit.
Damn.
Oh…my…God.
My vocabulary had become limited. Michael’s lips were as soft as I thought they would be. I got lost in that man’s kiss. The way his lips overtook mine had me moaning and I didn’t even know it. Was too afraid to compare who kissed better. Didn’t want to. I wanted to pull away but couldn’t. The more I tried to stop, the deeper he took the kiss. My nipples pushed against the fabric of my bra. I was too afraid to move for fear of my arousal running down my leg. I was having an orgasm standing in the walkway of a movie theater.
“Damn, bruh,” I heard someone say as they passed us.
Heard a few female giggles. “Gotdamn, he kissing the shit outta her,” one said.
“Wish a nigga would kiss me like that,” another said.
“They may as well go home and start fucking…”
People laughed and someone else said, “Them niggas ain’t bout to make it home. Imma go in whatever movie theater they going in.”
No matter what they were saying, Michael didn’t pull away from the kiss. In fact, it seemed as if having an audience riled him more. I dropped the popcorn and the drink. Needed my hands. Had to place them somewhere on him when he pulled me closer to him. One of his hands gripped my ass while the other played in the back of my hair. I had to use one of my hands to keep the back of my dress down. That motherfucker kissed me until my lips went numb.
When he pulled back, I was left panting…watching him….waiting on him to do it again….wanting him…
I felt sorry for his wife in the moment. I couldn’t have been his wife. To know that your husband possessed that much sexual prowess had to be bad on a woman’s mental health. She had to know what she had at home. Had to know he was a beautiful liar. The devil. Temptation in the flesh.
Bi-Satisfied is coming August 2015
{ This picture is copyright protected. It can NOT be republished anywhere else for any reason}